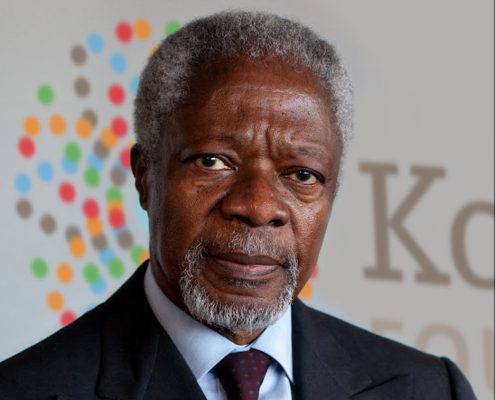 Towards a Fairer, more Peaceful World

Kofi Annan, a laureate of the Nobel Peace Prize, served as the Secretary-General of the United Nations from 1997 to 2006. As founding chair of the Kofi Annan Foundation, he continues his important work by mobilising political will to overcome threats to peace, development and human rights.

In early 2008, he led the African Union’s Panel of Eminent African Personalities, which mediated a peaceful resolution to post-election violence in Kenya. From February to August 2012, he was the UN–Arab League Joint Special Envoy for Syria, mandated to seek a resolution to the conflict there.

Alongside Nelson Mandela, Jimmy Carter and other eminent statesmen, he was a founding member of The Elders, an independent group of global leaders who work together for peace and human rights. In 2013, he was appointed its Chair. Kofi Annan’s widely acclaimed memoir: Interventions: A Life in War and Peace was published in 2012.

A Look Into Your Body – The Evolution of Interfaces