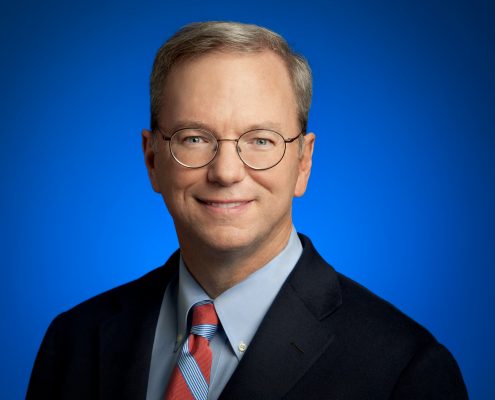 As a side event to the Munich Security Conference, the TUM Business Club organizes a new TUM Speakers Series event. On February 16, 2018, we will welcome Eric Schmidt, former Executive chairman of Alphabet Inc.! The Technical Advisor is going to talk about future innovations and future technology, as the title is „OK, Google – what’s the future?“
Entrance starts at 7 pm.

Eric Schmidt is Technical Advisor to Alphabet Inc., where he advises its leaders on technology, business and policy issues.

Eric joined Google in 2001 and helped grow the company from a Silicon Valley startup to a global leader in technology. He served as Google’s Chief Executive Officer from 2001-2011, and as chairman from 2011-2017. Prior to Google, Eric held leadership roles at Novell and Sun Microsystems, Inc. He holds a bachelor’s degree in electrical engineering from Princeton University as well as a master’s degree and Ph.D. in computer science from the University of California, Berkeley. He was a member of the President’s Council of Advisors on Science and Technology. Eric is Chairman of the Department of Defense’s Innovation Board and was awarded the Medal for Distinguished Public Service by Secretary of Defense Ashton Carter.

He is the co-author of The New Digital Age and How Google Works, and serves on the boards of the Mayo Clinic and the Broad Institute. He’s a Gulfstream pilot, and his philanthropic efforts through The Schmidt Family Foundation focus on climate change, including support of ocean and marine life studies at sea, as well as education, specifically cutting-edge research and technology in the natural sciences and engineering.

Building Blocks of the New – New Digital Business Models for the German...
Scroll to top